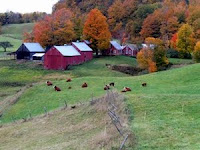 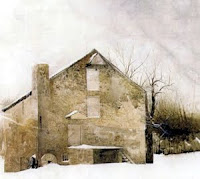 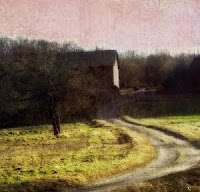 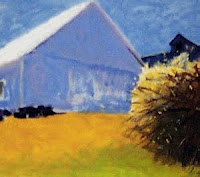 Wolf Kahn
. . . two roads diverged in a wood, and I --
I took the one less traveled by,
And that has made all the difference.
Robert Frost, The Road Not Taken


This morning's drive to work began as any other morning, dealing with traffic, stopping for gas (and going broke in the process) -- but then I took the other fork in the road, to paraphrase Mr. Frost.

As I was early, I followed a route that parallels the CT River and is dotted with old New England farms, rolling hills covered in green, feathered with clumps of azalea, rhododendruns and the last of the magnolias.  The air was particularly crisp and clear, a sky so blue it took my breath away.

Again, another detour -- I climbed up into these hills and followed some signs for local orchards.  As I drove up over the crest of the hill, small valleys and dales of line after line of orchard trees rolled out before me.  Old white clapboard farmhouses were caught in the morning sunlight and birdsong filled the air.

I am lucky to live in a part of New England where many farms and homes date back to the late 1600s/early 1700s; in our town Washington actually did sleep there and plan the Revolution with local soldiers.  It can be overwhelming sometimes when, as an artist, one tries to plan what to paint next -- there are so many choices, especially if considering painting en plein aire.

So as I drove this morning, I drew up my "battle" plan for the coming summer months:  to do a series of watercolor / aqua media sketches of these sites but break them down into manageable portions based upon geographical locations.  Otherwise, one becomes paralysed with too many choices and where to begin. In other words, I'll concentrate on one country lane and work my way along this stretch of landscape, painting glimpses of a time past that still continues to operate in today's world.

I feel it's important to try to capture these images as too, too often they disappear, plowed under by developers or just abandoned because of debt and foreclosure.

I hope to post my summer series here on the blog throughout the coming weeks.  In the meantime, if you love barns, you should visit Mark and Remark, where Bob LaFond continues to paint a series of barns in pastel.  Wonderful works as well as pithy remarks by the artist himself!
Posted by Kelly M. at 5/07/2010

Your New England is a beautiful part of the world. Lucky you! Can't wait to see your watercolors!

Great project for your watercolors! Your area offers wonderful inspiration with it's mix of barns, orchards and winding roads...can't wait to see the results!!

lovely, I will really look forward to these!

i have gone through your site information and it is the sae oppertunity that i was looking for thr facilities,
the process that what you are offering , are perfectely matched to my expection, very soon you will get
responce from my side