Another winter storm has just about halted daily life, at least for a few hours. Yesterday was cleaning; today seems to be a split existence: outside shoveling, clearing paths, thawing out cars; then inside to warm up, drink hot coffee and sift through old sketch pads that have been stacked up for months, years.  I was surprised at some things I uncovered, so I thought I would share some of these sketches. Below is a drawing of Egon Schiele's Moa, done in 1911. As I had worked on this sketch, I had jotted notes to myself:

Sketching Schiele's Standing Nude (the dancer Moa), intrigued by the "feel" of the line -- judging its weight, its thickness or thinness, the need for broad strokes or delicacy, thinking what will capture the feel of this person . . . With Moa I feel a sense of fragility, not like his other nudes that are edgy and raw. Moa is different. Schiele's line is lightness itself, a hint of eyeglasses, the thin arms hug her upper torso as if sheltering herself -- the hips push forward accentuating the thin frame, yet there is a healthy tuft of pubic hair, unlike Schiele's other nudes. As my hand moves around the paper, my sense is that he felt a sense of protectiveness, of respect, love for the little dancer . . . ? 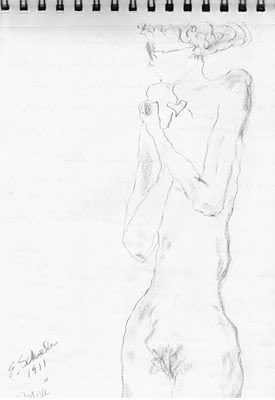 Here is a sketch I did about a year ago based on a nude in pen/ink I purchased 20 years ago in an antique shop. I fell in love with it the moment I spied her sitting in the shadows of the shop. I cannot read the signature; my guess is that it was a work by an art student somewhere in the area (there are 7 colleges and universities within a 10-mile radius). She has been hanging by the side of the fireplace keeping me company for a long time. 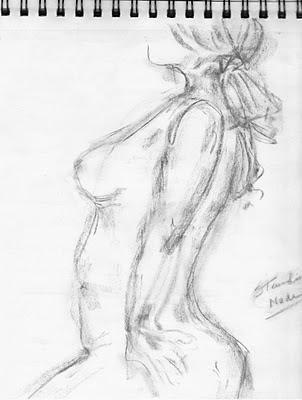 But how different from Schiele's work!  Moa needs this woman as a friend and protector because this woman is bold, confident, perhaps a bit brazen? She is a force to be reckoned with -- and the lines show it. The artist's strokes are thick, full of energy, with only the suggestion of a turban to add a touch of the feminine. The curves and angles thrust and parry the open space of the paper. Vastly different from Schiele's Moa, and I found I had to work harder, applying pressure and literally tackling the space of the paper.

So, I tried to emulate those same differences in these two drawings, one using a heavy, thick stroke, mostly in shadow with a pale patch of light on the breast and stomach. Very private, secluded, a closed feeling with only half the body visible.


This drawing I tried something different, using ink and a long, thin bamboo stick. I wanted to convey a sense of lightness, of openness. Again, a private moment. She may be sitting after a bath or maybe sunbathing on a beach. The stick was used not only as a pen device, but also rolled to break up the lines and keep a kind of kinetic energy going. Don't know if it worked but I think so (this is a section of the entire drawing; I could not fit the entire work on the scanner).


And finally, here are a few oddities that I discovered. These sketches have been in the book for probably two years. One is of Felix Nadar's photograph of Sarah Bernhardt. What attracted me to this image were the voluptuous folds of her gown, not quite off the shoulder, and her thick mass of hair. Nadar took this photograph of her when she was just beginning her stage career and I love it. 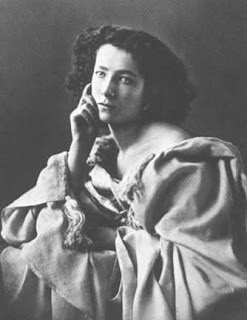 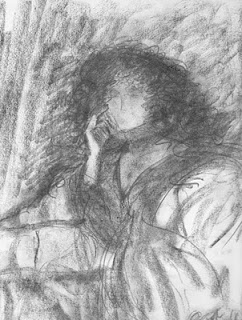 Below is the "oddity" -- the charcoal left a ghost imprint on the opposite page, which I like better than the original sketch! 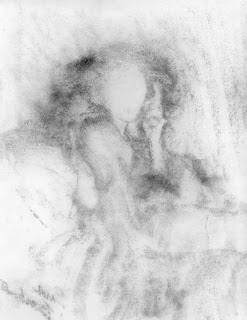 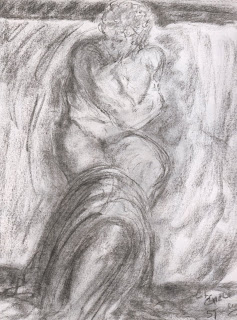 and on the opposite page, a ghost imprint. Not quite recognizable but suggesting a muscular torso, very Michelangelo? Like that better, too! 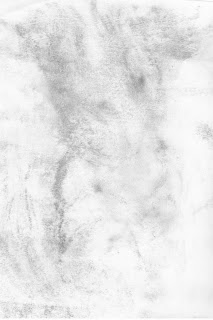 So, as the afternoon light fades and another winter's day is ready to close, I pile up my sketch pads in the bookcase and light some logs for the long night ahead. I hope you enjoyed the journey. I also found this quote that I wrote in one of the pads:


"Every single piece I make brings me varying degrees of disappointment, devastation and pain. Ironically, these are the very reasons that allow me to confront new work. Even though I know I will fail -- because I cannot bring to a new work the exact vision, emotion or imagination that is in my mind -- I will try to make it as close as possible.

The question is how to make it happen, what direction to go, what boundary to push . . . to what degree to be free or to limit myself."

I love graphite and drawing and line and shading- wonderful

Thanks so much, Donna!

Hi Kelly. I finally got over here to visit & I'm so glad that I did. I just love your drawings, your thoughts on them, on other artists & those "ghost" images are marvellous. I'll absolutely return...thank you so much for allowing us a glimpse in to your process.

Cheers on a cold Saturday evening. Now if only I had a fireplace! Stay warm.