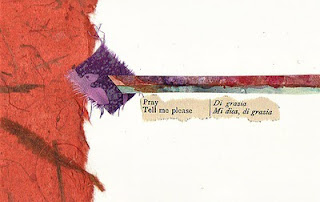 What sits on the margins, forgotten, shoved aside in search of something "better?"   In another effort to sift and sort, to organize my workspace, to dig and toss the detritus of years of making, one stumbles upon little projects, items that intrigued months, years ago . . . and then were shoved aside.  Perhaps not intentionally, but life has a way of shoving the small aside, including people. 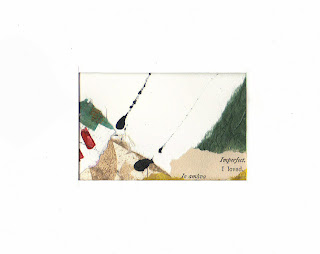 These were little works,  bits of flotsam and jetsam, like puzzle pieces that I had pieced together for some reason, maybe for no other reason than that I love the idea of Italy, of traveling someday to Venice and Florence, to the Italian Lake District (remember that wonderful movie, A Month by the Lake, with Vanessa Redgrave?) or to the Italian Riviera (another great one, Enchanted April) -- 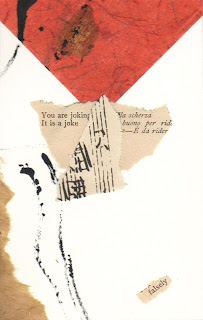 So this was my way of bringing Italy closer to me, by finding an old 1920s Italian grammar book filled with lovely phrases, and making these small collages.  And then something else came along, and they were slipped into a drawer until the other day.

Funny, though.  Once again they brought a smile to my face, a fleeting glimpse of standing on a canal or on a seaside cliff, speaking Italian effortlessly with the locals, sipping golden wine alongside my husband who would be draped in a soft linen jacket and wearing a panama hat just like Edward Fox in A Month by the Lake  (don't tell him about that point, though) . . . 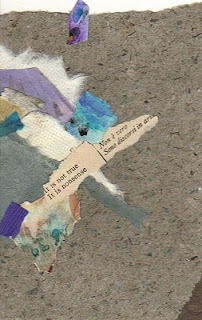 Well, all I can say is that at least now I have finally renewed my passport -- that's a step in the right direction, which I believe is due east and about 3,000 miles away.  Ah, some day . . .

Venice, the flattering and suspect beauty -
this city, half fairy tale

It's the one thing I enjoy about sorting and trying to organize the studio, the little forgotten gems, like yours, that you find. I went to Italy many years ago and loved it. Your collages are wonderful reminders.