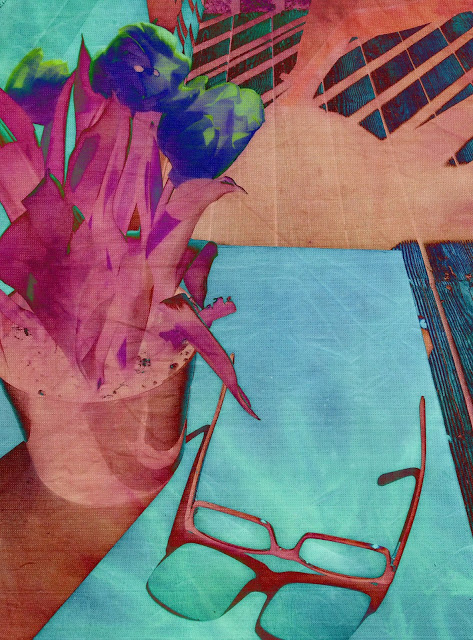 Sometimes it's just a heck of a lot of fun to play with an image in a program like Photoshop or Corel Paint and see what happens. I did this image back a few weeks ago during the heat wave we had, some days hitting almost 100 degrees -- much too hot to venture outside, even in the shade until the sun sank below the treeline. Even then the air was still and thick with heat and humidity, and the buzz of cicadas was almost deafening at times.

I took this shot back in the spring around Easter (you can tell by the potted tulips), but by the time I finished altering it, I was having thoughts of Florida with these hot "Miami" colors and hues -- thus born: Floridian Sensibilities!

It's funny -- a few years back in blogland there used to be more challenges around where you could participate in the conjuring of a new idea or image. But I don't see those much anymore. Maybe it's me, as I'm not out trolling around as much as I used to. Well --- enough goofing off. I should be doing something a bit more constructive, or at least that's what my left brain is telling me. But it's August, and I think goofing around in these final weeks of summer should be permitted, don't you?


I hope to make pictures like I walk -- under a spell, an instinct of motion,
a kind of knowing that is essentially indirect and sideways.

Ellen Meloy, Anthropology of Turquoise
Posted by Kelly M. at 8/03/2013

Photo shopped work is not always that interesting to me but I believe you have taken it to your creative place and made this piece quite your own! Great job!! Have a good summer!

Thanks so much, Mary Ann! You enjoy the rest of the summer also -- hard to believe it's coming to a close -- well, at least here in the New England area!