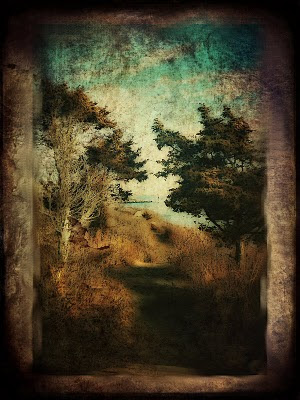 A Sense of Place
digitally altered photograph by artist
To continue from my previous post . . .

Keiji Shinohara, a renowned woodblock artist, stated once that he adjusted his approach to creating when he returned to Japan to help his aging father. It was then that he noted the beauty of Japanese garden design, specifically the technique of "shakkei," the borrowing of the landscape in the distance to blend with the foreground of the garden design.

Borrowing the landscape -- is that how it begins? As we move through our lives, do we borrow the landscape, the scenery from a trip or a childhood memory and work it into our creations? But at what point does the scenery turn into something more spiritual, more visceral?

And, more importantly, when does one's self become a part of the land, the earth, the river, the oceans and mountains? The loss of one's self-ness is difficult, especially for Westerners. We have been brought up to believe that each of us is a unique individual. We pride ourselves on our uniqueness, our resolute oneness. That is what we've been taught helped build this country -- the stalwart individual against the odds.

Ellen Meloy, who wrote works such as The Anthropology of Turquoise and Eating Stone, seemed to come to grips with this symbiotic relationship between human and earth:

"The sandstone was filled with secret veins that only the flesh could find. Press the stone and feel its flex, I thought, take the shape of its harrowing embrace. The sun would rise east of my hipbones. Color struck like blows. The light ratcheted up its blaze and flashed through each nerve, a net of flame, a field of exquisite friction. I was seized by something that could never be wrestled down, a feeling not unlike sorrow and ecstasy compounded. Then came the sweet drift of longing, and I hung on to the earth's curve for dear life, breathing the comfort of stone during my ride."

Meloy died an early death but left several books that delve deeply into our brief contact with this universe.

I intend to read all.

I intend to keep all.

I intend to re-read all.

It is the least I can do.

Hello-- I love Ellen Meloy's writings-- I have her Anthology of Turquoise-- just did a post on her book myself-- we are on the same 'train' :-)

Excellent!!! Her writings are quite astounding - have been "nursing" her books for months now knowing there will be no more -- :-(

I too am a fan and this quote is a favorite!

Thank you for this wonderful post not only for sharing a writers work I am not familiar with, but now feel I should discover, but for also sharing a new digital artwork with us.