Topography of a River 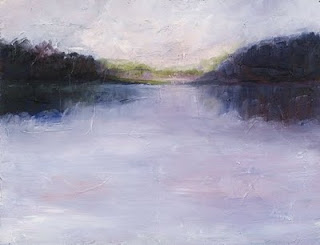 How does a landscape, a certain place become a part of one's self? When is it so integral to one's breathing and thinking and dreaming that it no longer is simply a "landscape," but an unconscious drawing together of elements from the experience of the land -- or in this case, the waters that flow southward, that are no longer observed but rather felt?

I have traveled along the Connecticut River in my daily commute for almost 15 years now. I have seen it totally frozen over, a thick slab of white, crackled and rumpled with layers of ice and snow, but knowing that beneath currents still travel south to the Sound, pulsing with sleeping life. 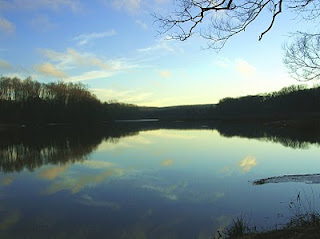 Shadows on the River
photograph by artist
During the spring, with the northern thaws up in Vermont and Massachusetts, the River swells and shoulders up onto the shorelines, often sweeping into buildings and over docks. In late March the crew teams of Wesleyan and Trinity skim the surface like tiny dragonflys, zipping along in the late afternoon light -- a sure sign that spring has arrived. Pale pink clouds of dogwood and mountain laurel rim the shadowy edges as I drive home in the dusk. 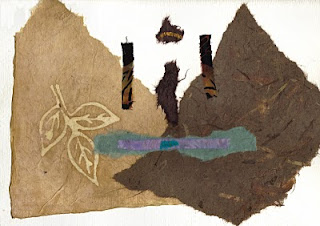 River and Rocks
collage with lokta and banana papers;
batik cottons on Nujabi paper
9 x 12
In summer the River runs lean, eddying gently along the rocks and shorelines, as if saving its strength in the heat. Boaters and tubers frisk about and, here and there, small dockside restaurants spring up to serve the locals.

Autumn brings rains and swift waters again, swelling the River in its last effort to round out the cycle of the year. Now the River is in its full glory with crests of gold and russet trees, dark green pines thick with cones hemming its' edges, reflected in its' deep blue surface, offering twice the beauty.

As I sorted through my works this snowy day, I noticed how often the river appears, in some way, throughout the years -- paintings, photographs, collages -- a waterscape that moved from the decorative to the felt, becoming one with the inner topography of the heart.
“A place belongs forever to whoever claims it hardest, remembers it most obsessively, wrenches it from itself, shapes it, renders it, loves it so radically
that he remakes it in his own image.”
Joan Didion
Posted by Kelly M. at 2/10/2010

I am glad to see you painting again and the format 11x14 is perfect and not because it is my favorite size for landscapes.

Rather it is not to small or to big. It lets the viewer move in closer and be intimate with the painting as a larger canvas robs us of that pleasure.

Thank you for sharing,
Egmont

Yes, sometimes large is too much, too overwhelming. The smaller canvases do invite closer scrutiny, more intimacy!

Landscapes and beautiful photographs and the words of the artist..What more could one ask for.

lovely prose about the 'river' and inspiration for your beautiful painting.

Thank you all for your visits and comments! On a bleak winter's day, it warms one up!